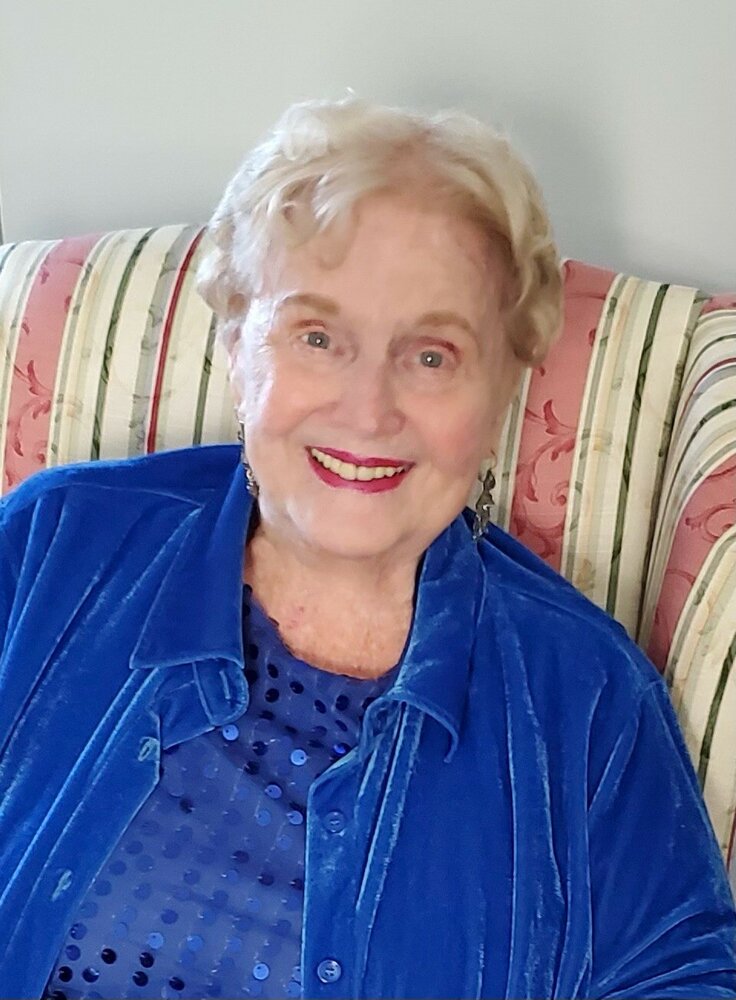 Margaret “Meg” Mullen Morley passed away peacefully and surrounded in love on May 5, 2022, in Fairfax, Virginia.  A tip of the hat to her fondness for musicals, the curtain closed on Meg’s beautiful life as The Pajama Game played in the background.

Together with her late husband Dean (Bud) Morley, Meg raised three daughters Rozanne Davis (deceased) (Donald); Michele Haworth (Todd); and Lisa Morley.  She was a devoted grandmother to Heather Davis, Adam Davis, Brian Davis (Julianna), Kate Haworth, and Leah Haworth.  Meg was born in 1930 in Philadelphia, Pennsylvania and later lived in Florida and then Virginia where she raised her family.  Upon graduation from high school, she worked for AT&T and later became a flight attendant for National Airlines and traveled “Coast to Coast”!  She met Bud in an Irish bar and the luck of the Irish was with them!

Meg was the consummate storyteller and limerick writer.  Her stories told of days gone by and our nation’s past, her childhood, travels as a flight attendant, life as a military wife, adventures with frogs in Florida, creative hostess tips, children’s antics, grandchildren’s accomplishments, and her losses and joys.  She was an avid breeder of Boston Terriers, and she shared her encyclopedic knowledge on how to care and train them for domestic life.  As an active bird watcher, she knew the types of birds that flew in and out of her garden and she was ever ready with bird seed, suet, and sweet liquid for the hummingbirds.  Never one to dwell in self-pity or sadness, Meg was both sentimental and hopeful and her gaze was always toward the bright horizon.  She was thoughtful, always eager to pick up the phone and call a friend or family member to see how things were going and how they were doing.  Her pragmatic and frank demeanor left one knowing they had the real deal in Meg and could count on her honesty and loyalty.  Like a Broadway performer, Meg showed up on time, dressed to the admirable nines, beautifully coiffed, bedecked in colorful jewels, with nails and toes perfectly painted to match the colors of the season.  Indeed, she was “one, singular sensation” and proud to be in “The…Game.”

That she was an unceasing champion of her daughters throughout her life is no surprise. In her last curtain call, Meg tipped her hat confidently to her family and friends because her admirable, full, generous, loving, long running show had come to an end and she was ready for God’s eternal embrace.

A memorial Mass will be held on Friday, September 2 at 10:30 a.m. at Our Lady of the Blue Ridge Catholic Church, 692 Lonnie Burke Road, Madison, VA, 22727, followed by the burial at Culpeper National Cemetery, 305 US Avenue, Culpeper, VA, 22701.  A celebration of life will be held Thursday evening, September 1st at the home of Lisa Morley in Falls Church. In lieu of flowers, donations may be made in Meg Morley’s honor at Boys Town at www,boystown.org or 14100 Crawford Street, Boys Town, NE 68010,

To send flowers to the family or plant a tree in memory of Margaret Morley, please visit Tribute Store
Friday
2
September

Share Your Memory of
Margaret
Upload Your Memory View All Memories
Be the first to upload a memory!
Share A Memory
Send Flowers