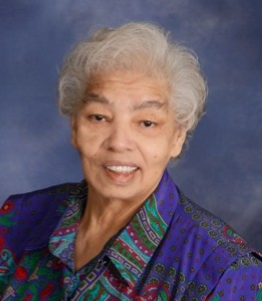 Cyrilene Crichlow, née Webster, was born in Barbados on May 1, 1933 to Millicent Moseley and Goulbourne “Johnny” Webster. She left Barbados as a young adult to study nursing in England. She became a registered nurse in 1959, and, within a short time, became certified in midwifery and ophthalmic nursing. Cyrilene remained in England until 1962. She subsequently lived and worked in Saskatchewan, Canada before settling in New York City. She has resided in northern Virginia since 2004.

Cyrilene loved a good calypso and would start to dance the moment one was played. She also had a special love for classical music and for hymns and loved to sing. Cyrilene was a choir member in the Encore chorale for older adults. She also sang periodically at the Sunday services at Goodwin House, where she lived for the last several years of her life. Christian faith was very important to her. She led Bible study as a young person and as an older person led summer Vacation Bible School classes for young children.

Cyrilene devoted her life to her family. In fact, her greatest legacy is that she was a tireless advocate for her children, ensuring that each of them received a quality education to open up opportunities for them that were not available to her as a young woman. She ultimately earned her own college degree in 1999 from York College (at the age of 66), after all of her children had graduated from college.

Cyrilene was passionate about education, especially for those who have been afforded few opportunities. In lieu of flowers, please donate to Student Sponsor Partners, a New York City-based organization that works with low-income and academically average students with potential, providing them with mentorship, a high-quality education, and the support and inspiration to excel academically. https://sspnyc.org

A memorial service will be held sometime in 2021.

To send flowers to the family or plant a tree in memory of Cyrilene Crichlow, please visit Tribute Store

Share Your Memory of
Cyrilene
Upload Your Memory View All Memories
Be the first to upload a memory!
Share A Memory
Send Flowers