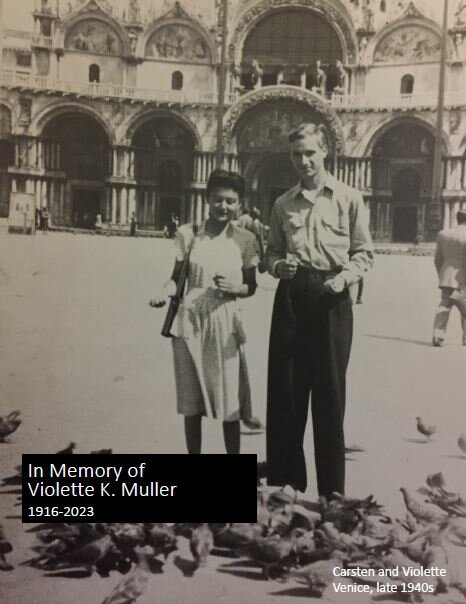 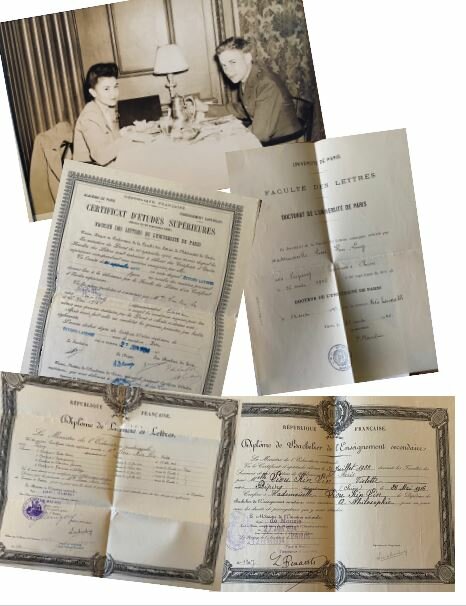 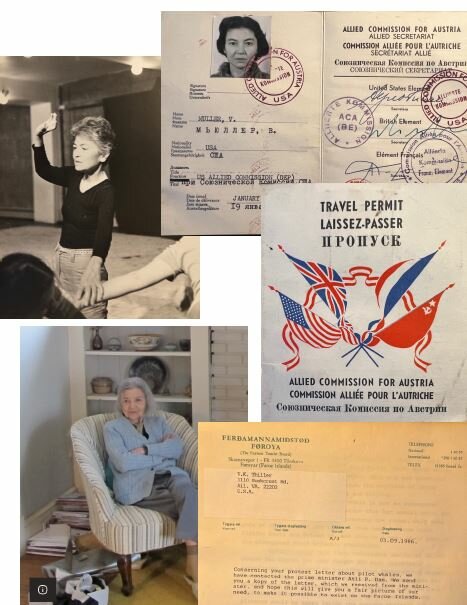 Violette was born on May 26, 1916 in Beijing to a German mother and Chinese father. Her father was a high-ranking diplomat and banker in the pre-revolutionary Chinese government. She was educated largely by tutors where she learned in addition to Chinese, French, German, and English, all of which she spoke without a trace of an accent. She moved with her family to Paris when she was 12. There she studied with tutors and earned degrees at the Sorbonne.

Violette was in Paris during the beginning of the German occupation where she would overhear German soldiers who could not imagine that she spoke German. She and her father traveled to New York in the later stages of the war. Her father, a man of some wealth, helped countless relatives and friends leave as well. Her mother returned to China and Violette was never to see her again.

Violette settled in New York where she worked for the Free French. She also worked for the Pearl Buck Society traveling to university campuses across the US giving lectures on China. She bought herself a car but needed to learn to drive, which is how she met her husband-to-be, Carsten Muller who had volunteered to teach her. He was the son of a Danish mother and a German father. At that time, “inter-racial marriage” was illegal in some states and it was with difficulty that they found a priest in Seattle who was willing to marry them.

Carsten was drafted at the end of the war and placed into the OSS (The Office of Strategic Services). His job was to identify former members of the German government. Violette followed him to Germany and was very helpful since her language skills were always better than his.

Violette and Carsten had two children, Toni and Nancy. When the girls were young, Carsten joined the Foreign Service, the family was stationed abroad in Saudi Arabia, Salzburg and Paris. When the family returned to Washington, DC in 1969, Carsten, who had until then been in perfect health, was suddenly diagnosed with cancer and died shortly thereafter.

Following Carsten’s death Violette worked at the Library of Congress as a cataloger where she drew on her prodigious language skills. She also performed translations for the Smithsonian Institution well into her 90’s. Violette was a great lover and rescuer of animals, often adopting stray cats, scooping up injured squirrels from the road and giving generously to animal protection charities. She was also an accomplished pianist.

Violette died on Tuesday, January 3, 2023. She was 106. She is survived by her two children, Toni Muller and Nancy Muller; her grandchild Cars Stewart; her son-in-law Don Stewart, his sister Dini Stewart; and members of the Louis family.

To send flowers to the family or plant a tree in memory of Violette Muller, please visit Tribute Store

Share Your Memory of
Violette
Upload Your Memory View All Memories
Be the first to upload a memory!
Share A Memory
Send Flowers