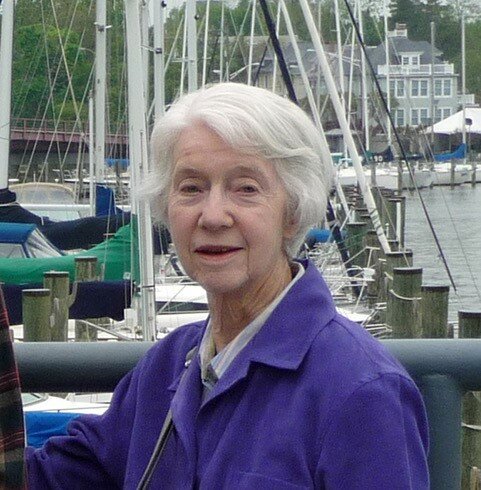 Frances (Fran) Thayer Fritz was born on January 26th, 1925, in Traverse City, Michigan, to Bertha A. Thayer (Stites) and Carl F. Thayer.  She attended the Michigan College of Education (now Western Michigan University), taking time out in 1945 to marry Bernard C. Fritz, who attended the college as a member of the Marine Corps V12 Program before shipping out to Camp Lejeune, North Carolina, for Boot Camp.  They were married on March 10th, 1945, in Jacksonville, NC.  Following boot camp, Bernard moved north to Officer Candidate School at Quantico, Virginia, where Fran found employment with the Assembly & Repair Department at MCAS Quantico.  While there, she worked on some of the Marine Corps newest helicopters and the famous F4U “Corsair” fighter plane.  Bernard subsequently was commissioned a Second Lieutenant on August 14th, 1945, VJ Day.  With the end of the war and discharge in late 1945 from the Marines in hand, both resumed their studies at Western Michigan.  Fran graduated in 1948 with a degree in Education.

Following graduation, Fran and Bernard moved to Arlington, Virginia, and after a brief stint teaching in Alexandria, Fran became an editor with the Department of the Army’s Historical Division.  Her work was recognized in the forward to the U.S. Army in World War II, European Theater of Operations, Volume I:  The Lorraine Campaign.  She left the Pentagon in May of 1951 to start a new job in the early years of the Central Intelligence Agency, and shortly thereafter, enticed Bernard to join her.  Both enjoyed lengthy and interesting careers with “The Agency.”

Fran left the CIA in the latter part of 1953 to begin a 13-year interlude during which she raised three daughters and traveled with her husband for a tour in London in the early 1960s.  This gave her the chance to visit that part of Europe “just over the Channel,” re-igniting a life-long passion to travel and see the world.  Fran resumed her career as an editor with the CIA in 1966, first at the National Photographic Interpretation Center, and later with the Directorate of Intelligence in Langley, Virginia, where she retired for the final time in 1985.  While one career ended, Fran and Bernard started their second:  seeing as much of the world as they could.  From 1980 through 2000, they managed to see Europe again, including a trip to the Soviet Union, a particular treat for Bernard, a former analyst of Soviet strategic missiles.  Over those years they took multiple foreign trips, visiting Australia, Asia, South America, and the Eastern Mediterranean, including Greece, Turkey, Israel, and Egypt.  In between they also saw much of the United States:  the Midwest, Plains states, Rocky Mountains, and California and much of the Pacific coast.

Following the death of her husband in 2013, Fran moved several times before finding a new home in 2015 at Brightview Senior Living in Great Falls, Virginia, where she passed away quietly on September 29th, aged 97.  She is survived by her daughters Rebecca (Becky) Fritz of Reston, Juliana (Julie) Hilt (Thomas) of the District of Columbia, and Angela (Angie) Baldwin of Petersburg, Virginia.

To send flowers to the family or plant a tree in memory of Frances Fritz, please visit Tribute Store
Wednesday
19
October

Share Your Memory of
Frances
Upload Your Memory View All Memories
Be the first to upload a memory!
Share A Memory
Send Flowers