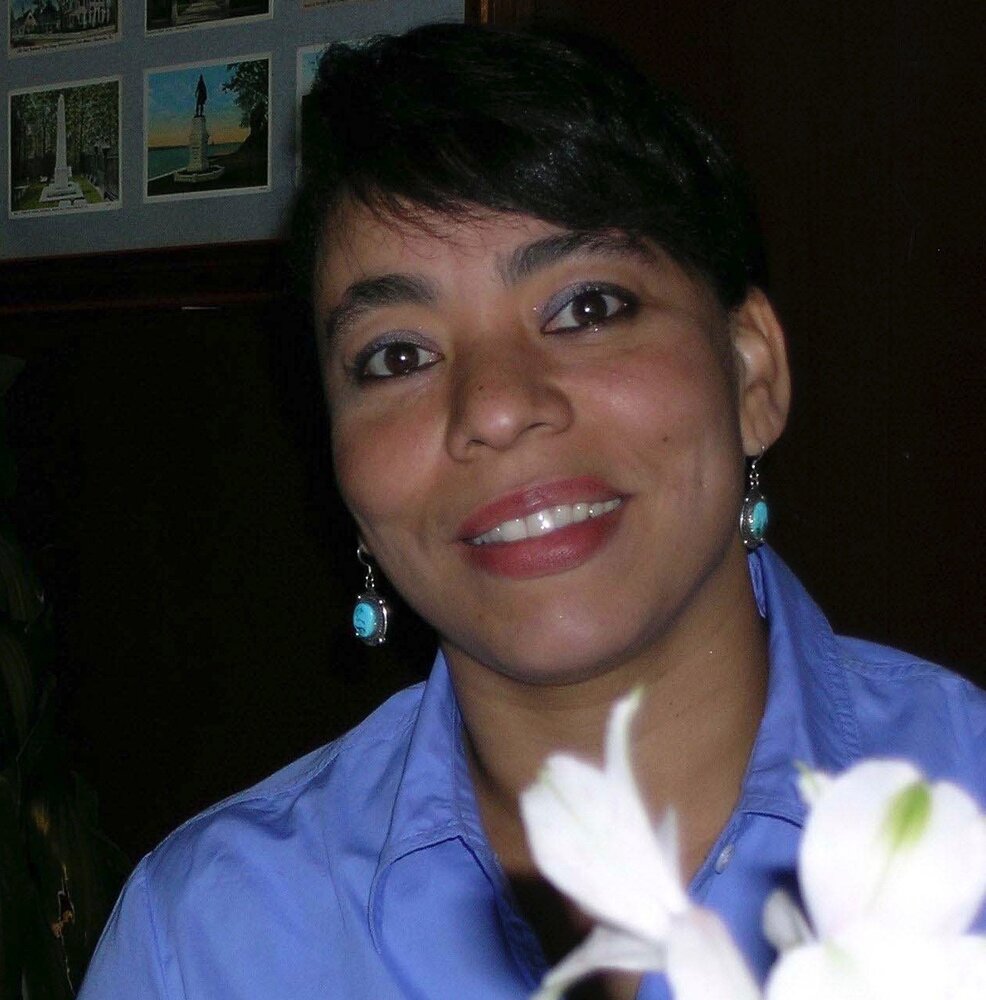 Stephanie Lyn Robinson, a human rights attorney and beloved daughter, sister and aunt passed away in McLean, VA on August 10, 2022.  She was the youngest of three daughters born to Faith A. Robinson and Haynes B. Robinson, MD, both of whom predeceased her.

She spent her earliest years in Buffalo, New York where she lived in a neighborhood with children from all over the world. Stephanie spent her elementary and high school years in Akron, Ohio.

During her college years, she studied at Brown University where she was a member of The Chattertocks, one of the oldest women’s college a cappella singing groups in the United States.  She was also involved in theater at Brown,  and with her cast mates in the Brown production of “The Colored Museum”, she was the winner of the American College Theater Festival/John F. Kennedy Center for the Performing Arts National Award for acting in April 1988.

She also served as a congressional intern for The Honorable John F. Seiberling, 14th District, Ohio.

During college, she studied abroad in Brazil at Universidade Federal da Bahia, Salvador, Bahia, an experience that fueled a passion for travel and a love of the beach and sunshine that lasted all of her life.

A favorite family story, told many times over the years, involves one of Stephanie’s  first efforts to advance the cause of human rights.  In her senior year of college, she was among a group of Brown University students involved in a protest advocating divestment from South African corporations supporting apartheid.  The protest disrupted a university corporation meeting as about 40 to 50 Brown students entered the room and read a statement to corporation members demanding that the issue of divestment be placed on their agenda.

Following the protest, the dean of student life presented a piece of paper to the protesters and asked those who wished to take responsibility for their action to sign.

The 20 students who opted to sign the sheet, including Stephanie, faced possible expulsion from Brown. The others involved, who opted not to sign to take responsibility for their actions, faced no consequences. At this time, Stephanie was about 4 months from graduation. Family members often joked that during  the month that elapsed between the protest and the decision of Brown's Disciplinary Review Board, her mother’s hair turned from salt and pepper gray to completely white.

Fortunately for Stephanie, in May 1987, not only did the Board decline to expel the students, but each of the 20 students received a Human Rights Award from Rhode Island State Representative Ray Rickman for supporting divestment and human rights in South Africa.

She earned a BA in Development Studies in 1987 and an MA in Brazilian Studies from Brown University in 1988.

Stephanie inherited an adventurous nature, a wanderlust and an affinity for learning foreign language from her father,  and an intolerance of injustice and a deep compassion for those suffering from abuse of any kind from her mother.  She put these personal qualities to use to serve as an advocate for downtrodden and oppressed people all over the world throughout her career.

She began her career as an immigration lawyer and later worked for the Lawyers Committee for Human Rights.  Stephanie wished to continue to pursue opportunities to advance her interest in human rights and was employed by the US Department of State where she served in many capacities over a 10 year

period.   As a State Department Abductions Officer, she worked with a team which returned nearly 50 children abducted to Mexico to their custodial parents.  As a Haiti Desk Officer during the 2010 earthquake in Haiti, she received a U.S. Department of State Meritorious Honor Award in recognition of outstanding response to the earthquake. During her period with the US Department of State, she received a number of additional awards and spearheaded the first gender and human rights portfolio in the Office of Caribbean Affairs.

Her work also involved extended periods during which she lived in Buenos Aires, Argentina and Kampala,  Uganda where she worked for the United Nations High Commission for Refugees to improve circumstances for refugees from around the world.

In more recent years,  she completed a Fellowship in Global Journalism at the University of Toronto and assisted in the provision of quality legal representation for children involved in human trafficking and asylum cases.

Stephanie cultivated deep and enjoyable friendships with people from around the world, yet she  treasured old and dear friends from childhood. She had a lifelong love of music and movies of all kinds. It was easy to make Stephanie laugh, and she laughed often, and uproariously at all manner of amusing situations in life.

She demonstrated great love of and dedication to family and provided devoted and attentive care for both her mother and father during their  final illnesses. She adored her two nieces, Chloe and Celeste Saddler, and they  adored her, and looked to her for humor, advice, and inspiration. Those who knew and loved Stephanie learned a great deal from her, including the value of travel and an open mind, rejection of the limitations of age,  how to avoid stagnation in life and how to embrace adventure.  She was a fierce advocate for her intellectually disabled sister, Melanie. Even when she was diagnosed with advanced cancer, Stephanie remained a caregiver for her and was actively involved in assuring that Melanie’s life was as comfortable and happy as possible.

Over the 18 months of her illness,  Stephanie displayed remarkable courage, stoicism, and a faith in God that persisted despite her suffering.  She leaves her sisters, Antoinette Saddler (Stephen Saddler)  and Melanie Robinson, her nieces, Chloe and Celeste Saddler, many cousins and devoted friends to mourn her loss.   Stephanie’s passing creates an enormous void in our lives and we will treasure her influence on our lives forever.

Those who would like to make a memorial donation to a cause important to Stephanie may wish to consider a contribution to the Inman Page Black Alumni Council (IPC) Brown Annual Fund (BAF) Scholarship. This Scholarship provides financial aid for exceptional African-American and Black students at Brown University.

The following link will allow you to make a donation online:  Click here to make an online donation

Please select the Tribute/Memorial box and indicate that your gift is in memory of Stephanie L. Robinson '87. In the “Special Instructions” box, please request that notification of your gift be sent to:  A. Saddler, 1302 Alps Drive, McLean, VA , 22102 so that Stephanie’s family can acknowledge your kind contribution.

To send flowers to the family or plant a tree in memory of Stephanie Robinson, please visit Tribute Store

Share Your Memory of
Stephanie
Upload Your Memory View All Memories
Be the first to upload a memory!
Share A Memory
Send Flowers