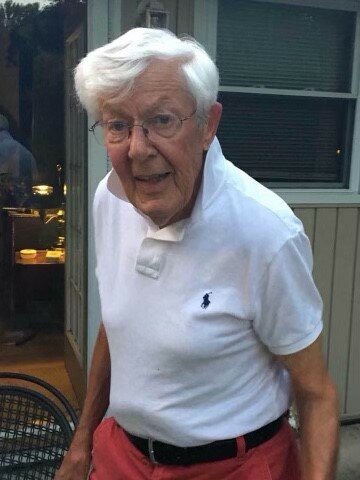 Frederick P. Griffith, Jr. (Fred), of Falls Church Virginia, loving husband, father, brother and grandad, died in his home of 60 years on Friday, August 5th  at the age of 94.  He was pre-deceased by his wife of 67 years, Frances; his parents, Frederick and Frances Griffith, and his sister, Theresa Johnson (Richard).  He is survived by his six children: Frederick P. Griffith III (Barbara), Stephanie Gallups, Leslie Griffith Daisley (Gordon), Claudia Young, Christopher Griffith (Susan) and Samantha Kearney (Thomas); 13 grandchildren, and 9 great-grandchildren as well as many nieces, nephews and cousins.

Fred was born in Washington, DC on October 6, 1927 and grew up on Fillmore Street in Arlington, Virginia, where he attended St. Charles grade school and Washington and Lee High School.  Following high school, he joined the U.S. Navy during WW2 and after completing his service, attended Shepherd University, where he played football, and Virginia Tech, where he earned his degree in civil engineering.  He married his sweetheart, Frances, who also graduated from W&L and they shared many happy, busy years raising their large family and building a great life together.

He went to work as a civil engineer for Fairfax County in the 1950’s before being hired to help form what is now Fairfax Water. Fred worked at Fairfax Water for 32 years and retired as their Engineer Director.  He was instrumental in the creation and development of the water system and the treatment plant in Lorton, Virginia bears his namesake in recognition of his major contributions. He was an extraordinary husband and father and loved a good party – especially if it involved dancing! Fred and Frances enjoyed traveling to New York City each year with friends to see Broadway shows, traveling throughout the U.S. to attend waterworks conventions, as well as taking the family on epic summer vacations to their properties in Dewey and Rehoboth beaches.  He was an avid tennis player and played for many years with his buddies at the McLean Racquet club.

Fred spent his retired years playing tennis and golf, helping his kids with home improvement projects, consulting work, babysitting grandchildren, attending his grandchildren’s sporting events and performances, working puzzles, watching Jeopardy!, catching up with family and old friends, eating crabs and seafood at any opportunity and just generally celebrating all of life’s events. Besides his charm and wit, Fred’s legacy to all who have known him is his great generosity. He will be sorely missed by all who knew him, but we can be comforted knowing there is a great reunion going on in heaven right now.

Arrangements for the Funeral Mass at the Old Post Chapel followed by interment at Arlington National Cemetery will be announced at a later date as those details are known.

In lieu of flowers, donations to Saint Jude’s Hospital would be appreciated.