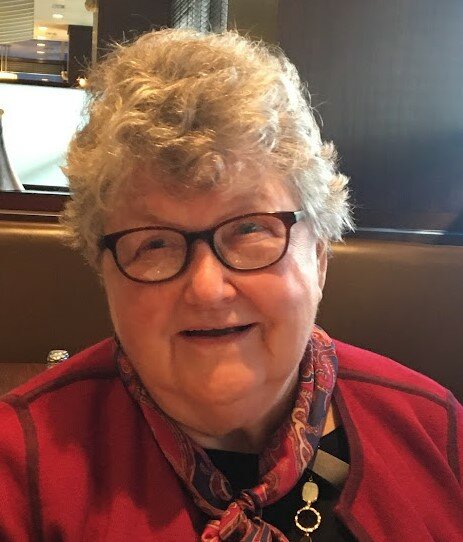 Mary (Maura) Gaffney, nee Roche, died Monday, May 2, 2022 at 80 years old. She was preceded in death by her husband Jim, her parents, Jack Luke and Kit, and her beloved siblings Nell and Denis.

She was born in her grandparents house in Meenleitrim, Knocknagoshel, County Kerry, Ireland in 1941. Her first years were spent there, surrounded by Gaelic, her first language.

As a young child she moved to the home her parents built in Knockafreghane. There on the farm on the high road she had a happy childhood with her brothers and sisters - along with cousins, aunts, uncles, friends and neighbors. She spent lots of time on a bicycle and at every dance she could manage to get to, as it was her favorite activity.

With little more than a sense of adventure, she set out for NYC in 1959. Working first as a mother’s helper and then at the business office at Elizabeth Arden, she built a good life. In 1962 she ran into a handsome young man heading the same direction as her on the subway, and the rest is history. She married her beloved husband Jim in 1965 and they celebrated 52 years of marriage before he passed in 2018.

She was a friend to all she met, a mother to children far more in number than her own, a caretaker and companion to the elderly throughout her life, a wizard with mental math and the most biased mother and grandmother you could ever meet. Her life was not long enough for those of us who loved her, and her impact on those she met is immeasurable.

She is survived by her children Tom (Sydny) of Seattle, Kathleen of Falls Church VA and Susan (Ariel) of Arlington VA - her adored grandchildren - Eamon, Mylos, Gabriel, Una, Jack and Lucas - and her dear brother and sister, Father Luke Roche and Noreen O’Connor - both of Ireland.

In lieu of flowers, the family asks that you consider a donation to the National Multiple Sclerosis Society.

Get Directions
Saturday
7
May

Share Your Memory of
Maura
Upload Your Memory View All Memories
Be the first to upload a memory!
Share A Memory