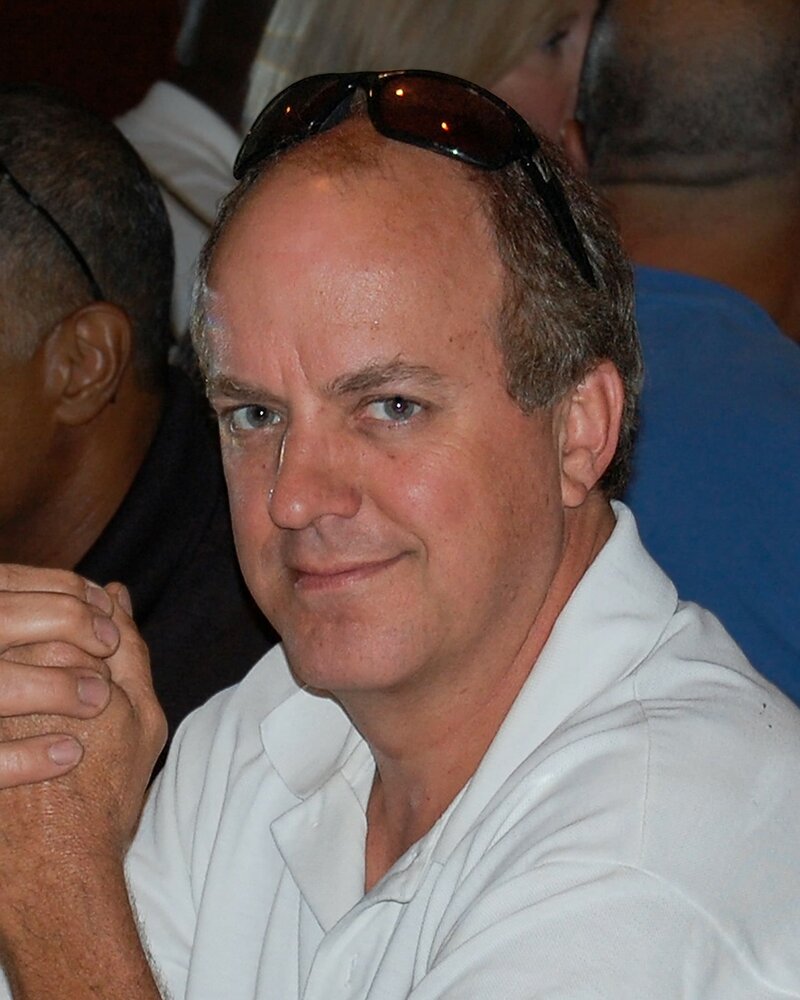 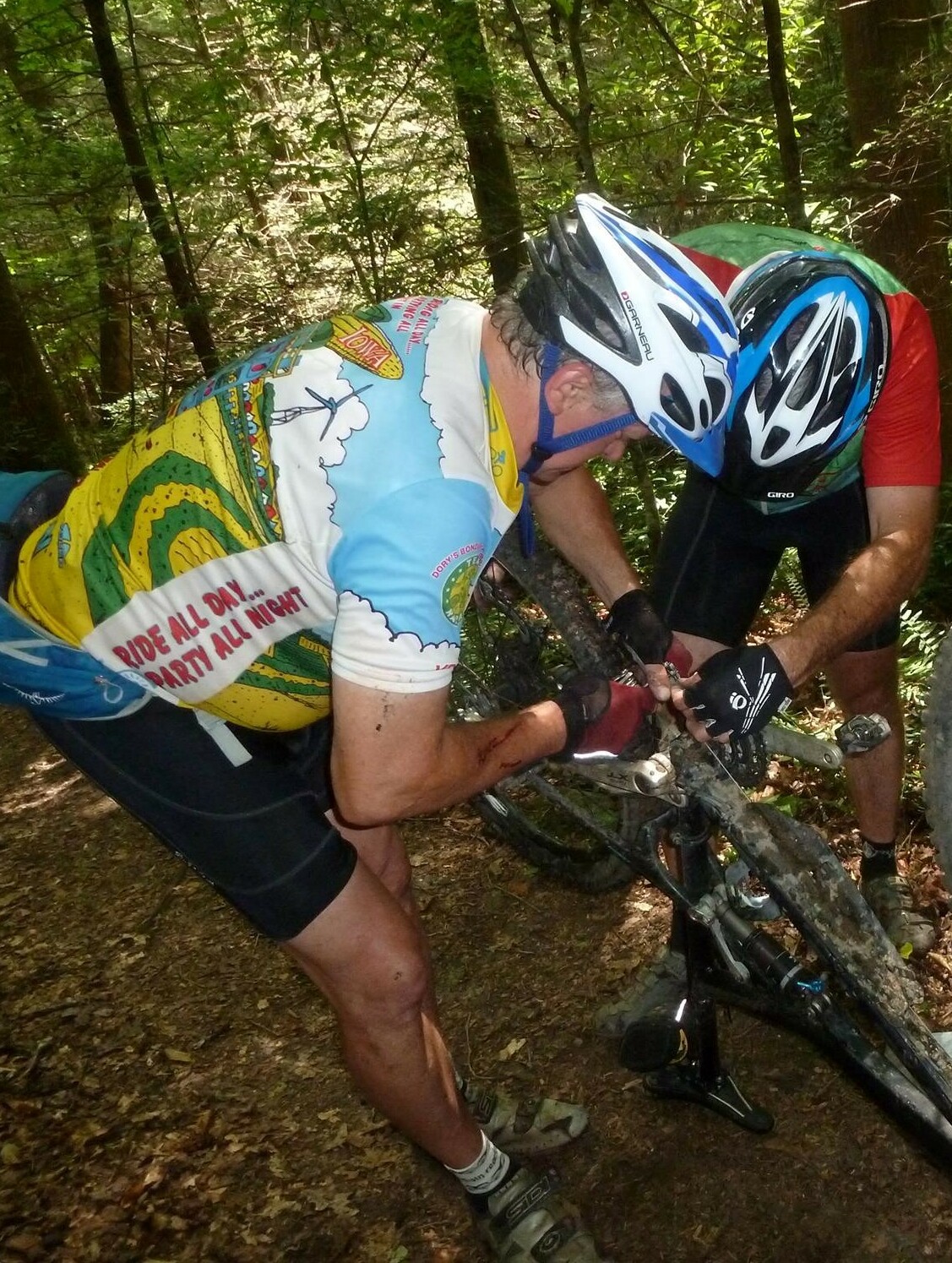 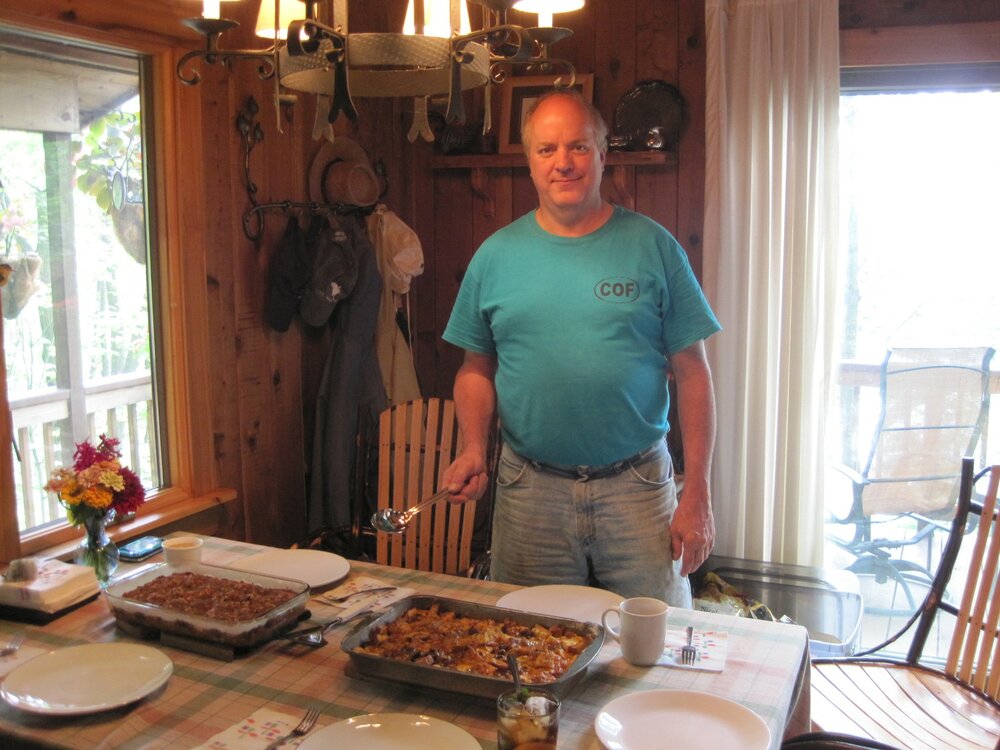 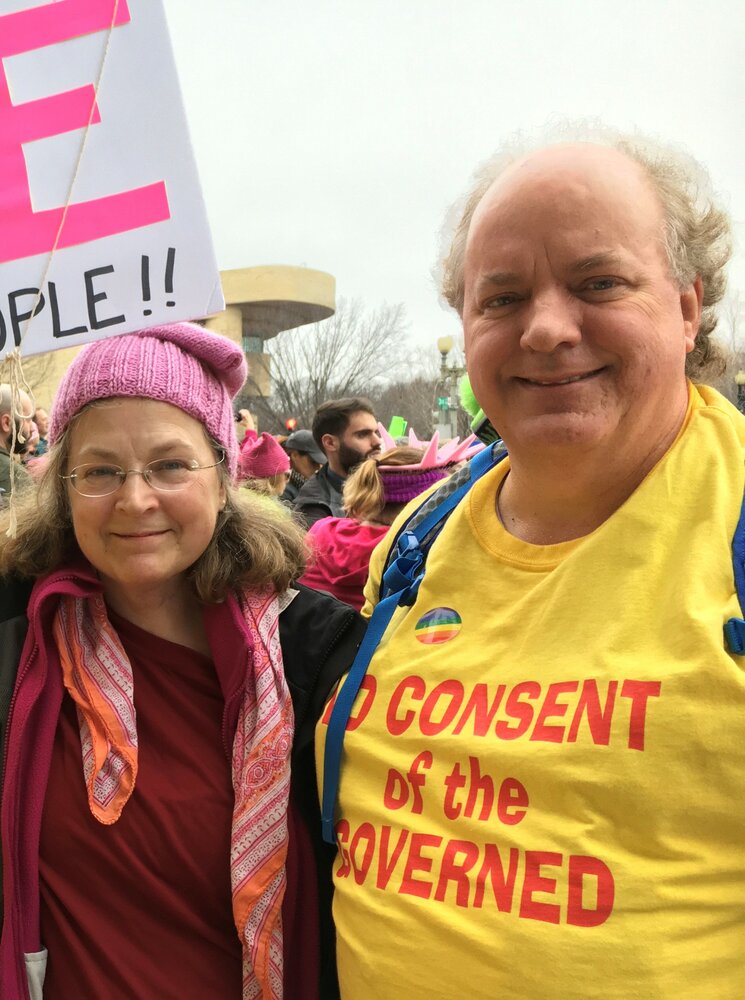 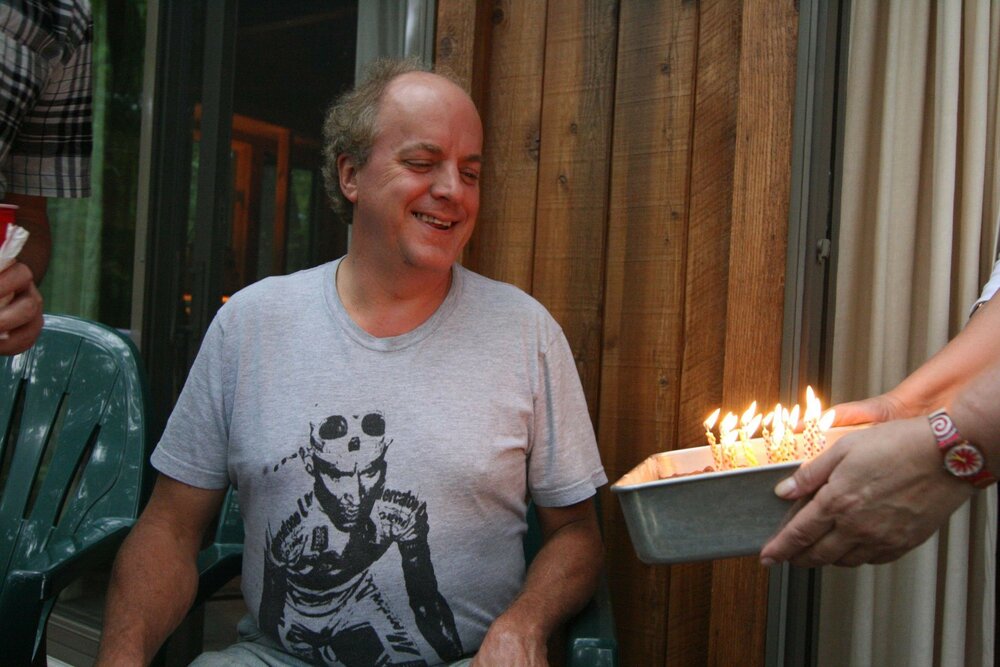 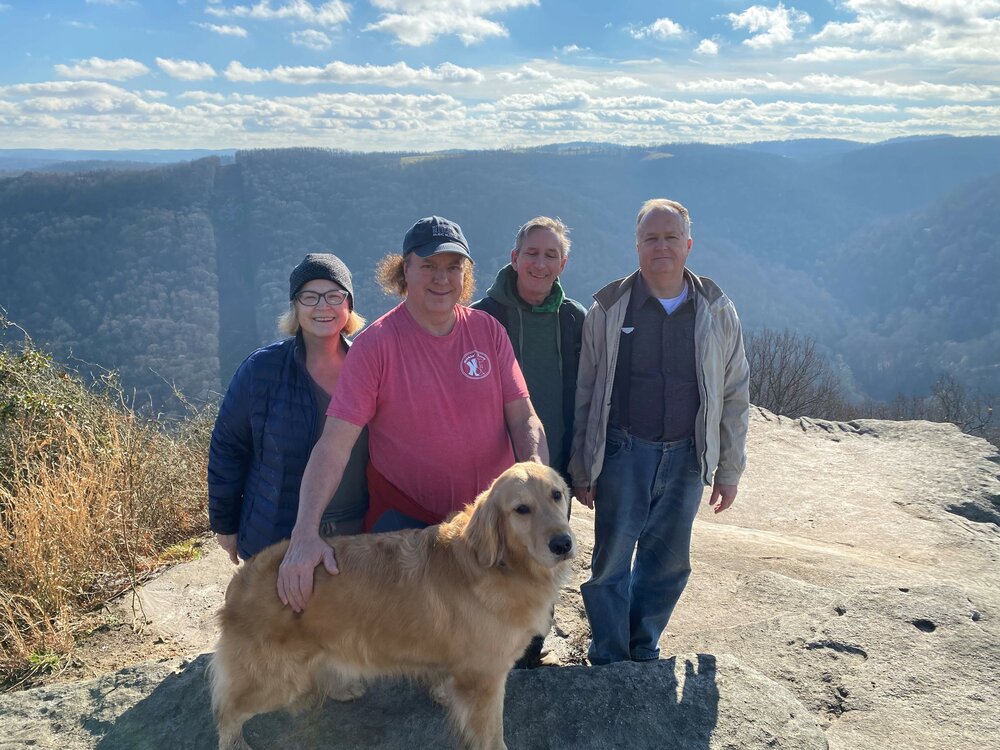 Jonathan Kostik, beloved brother, family member and friend, has died at home while working in his yard. He was 66. A memorial will be held at Bull Run Unitarian Universalist at 9350 Main Street, Manassas, Virginia at 4 pm on May 14, 2022 and via Zoom at this link.

Jon was a lovely person – kind, smart, curious, creative, and an independent thinker. He loved music, bicycling, cooking (and growing food) and digging into a wide array of topics that caught his interest. In recent years he became very involved in BRUU, supporting their work and developing a circle of good friends. It’s heartbreaking to lose him, and for him to lose a life in which he was thriving.

He was a capable and patient craftsman, a skill set he developed and maintained as a bicycle repairman for himself and others over his adult life, including numerous years where it was his work.  Most recently, he was a help desk technician for a federal agency contractor. His greatest craft project, however, was his home, which was always in a state of construction in at least one area. He beautifully renovated his living room, combining it with an adjacent bedroom and building in special storage for his vast LP and CD collection. Design and building at home provided an opportunity to express his creative side and the house is unmistakably his.

Jon was a music lover all his life. He didn’t just have thousands of albums, he played them for himself and others. Until the pandemic he hosted a fundraising dinner for BRUU where he and a friend cooked, and Jonathan DJ’d around a musical theme. He took many opportunities to hear live music, often at the Birchmere or a music festival, and always brought some speakers with him when he traveled so he wouldn’t be without his music.

Bicycling was another consistent passion – road biking, mountain biking, and party biking. In his early 20s, he left our driveway in Arlington and biked to Ithaca, NY and back, the first of many trips, and later alarmed his family by commuting by bike from Manassas to Reston. He and his mountain biking friends would travel and sometimes camp for trail riding in all weather, and one of his great pleasures for years was riding with Team RADPAN (“Ride all Day, Party all Night”) at the annual RAGBREI statewide ride in Iowa. Most recently, to his joy, he and his beloved new golden retriever Sky would find a wooded trail and she would run alongside him while he rode.

Jonathan was a skilled and creative cook, often using produce he had grown from seed. He kept finding new ways to use his hot peppers, and his family learned to ask which version of his guacamole was “safe”. He participated on cooking competition teams and the winning dishes would reappear for family and friends. Jon’s grilling was expert and his repertory extended from Mom’s Christmas cookie recipes to a recent triumph with matzoh ball soup for a friend’s seder.

While he was proudly self-reliant, Jon was always ready to help others and contributed to his community and circle of friends in large and small ways, and never for credit or recognition. Tangible, selfless service characterized his daily life, whether fixing a friend’s sink or building shelves for BRUU’s food pantry. There may be no more thankless task than roadside trash pickup, but he signed up with VDOT to maintain his stretch of road and faithfully set out with their orange garbage bags to make his neighborhood nicer.

Jonathan found BRUU after a thoughtful search for a spiritual home. As he described in remarks to the congregation just a few weeks ago, Jon was raised in the Presbyterian church but had grown away from it. Realizing he wanted to deepen his spiritual life he undertook visits to a variety of churches. He connected with UU’s philosophical underpinnings, but it was the deep sense of community he found at BRUU that cemented his relationship. Jon became part of the community and helped strengthen it with his active participation and willingness to help anywhere he could. Jon was a member of the BRUU Board of Directors at the time of his death.

Jonathan was born and raised in Arlington, Virginia, a son of Peter and Shirley “Sundie” Kostik. He attended Hampden-Sydney College then left with a friend for two adventurous sojourns in Hawaii. Jon completed his BA in environmental sciences at Warren Wilson College, where the college’s required work-study model suited his personal mix of intellectual exploration and hands-on accomplishment.  Jon’s steady interest in science made him our go-to source for questions about the natural world and he recently built on his interest in astronomy and physics to teach a pandemic online seminar on quantum mechanics. Like his siblings, Jon followed our national politics with interest and at times, dismay, but his insights were acute and he never descended to despair, or contempt for those he disagreed with. At his core he saw us all as members of one community.

Jon is survived by his brother Pete and Pete’s husband Bruce; his sister Carol; and cousins including Charlie (Judy), Nancy (John), Janice (Mac), Susie, Emily (Gary) and Nick (Linda). He also leaves behind an extended family, including the participants in our annual “Skyline” weekend at Big Meadows Lodge. This tradition started over 50 years ago in our parents’ generation and it’s very hard to picture the weekend without him: hiking, talking, tending the fire, watching sunset from Blackrock; and Jon going out late, when the rest of us were tucked in bed, to see the stars.

Jon’s family is grateful for the outpouring of memories and love we have received. In response to questions, if anyone would like to make a memorial donation we suggest BRUU’s Community Assistance Fund, which helps people with financial assistance during hard times. Please note “in memory of Jon Kostik” so the funds can be allocated to that need.

Share Your Memory of
Jonathan
Upload Your Memory View All Memories
Be the first to upload a memory!
Share A Memory