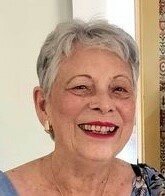 Beve was born in Wilmot, South Dakota on October 5, 1933, the daughter of Otto and Marion Barlund.  Growing up, she worked in the town’s drug store, serving drinks at the soda fountain.  Shortly after enrolling in General Beadle College (now Dakota State University) in Madison, South Dakota, she met Richard Palmer, and after tripping him to get his attention, they soon married.  While taking college classes, she taught at a country school in Madison, teaching 12 students who ranged from first to eighth grades.

Raising two sons, Beve and husband Dick moved throughout the upper Midwest.  During that time, she earned a bachelor degree from Western Michigan University, and advanced degrees from Oakland and Wayne State Universities.  With degrees in learning disabilities and special education, she taught and was a special education administrator, retiring after 17 years from Oakland County, Michigan in 1997.  They soon retired to Northern Virginia.

Together, over her 57 years of marriage, Beve enjoyed family, traveling, needlepoint, knitting, growing orchids, walking, and cheering for the Minnesota Vikings.  She volunteered at Goodwin House in a variety of activities, including the library and the health floor.  She is survived by her son David Palmer and his husband Mike Womble; son Steven Palmer; two granddaughters, Lindsay Palmer and Kristin Stuart, who along with husband Mike Stuart, recently gave Beve her first great grandson, Landon Stuart.  Contributions in her name may be made to the Richard J. Palmer Endowment at Dakota State University.  Services private.

To send flowers to the family or plant a tree in memory of Beverly Palmer, please visit Tribute Store