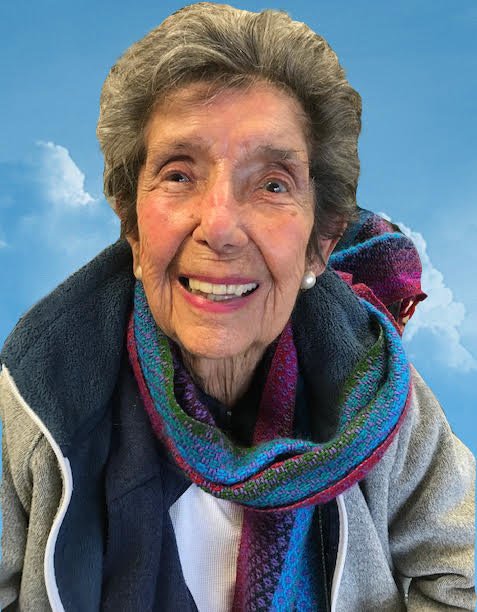 From her first newborn cry to her final breath, Maria combined her Brazilian joy of living with her unwavering faith in Jesus Christ, her Lord and Savior.  Maria was born, raised, and educated in Rio de Janeiro, Brazil. She was awarded by Bennett College (Rio) a graduate degree in mathematics, chemistry, and nutrition. She emigrated to the United States after marrying US Navy Officer William Clyde Powell in 1947. She gave birth to a daughter Clydette and a son William, and with Bill, raised them both in the United States and abroad. Decades later, her second marriage to Charles Whitney Abbott (“Pete”) brought into the family four young adults: Susan, Craig, Martha, and Eleanor. Having raised her family, Maria then worked in hotel management and was elected to the prestigious Les Clefs d’Or Society. With her many diplomatic and language skills, she served as Protocol Officer for the Embassy of Japan (Washington, DC). As a community volunteer, she loved teaching bridge at Goodwin House, as well as teaching English as a second language at Arlington Central Library. Because she was gifted as an author, she produced short stories, essays, limericks, and four non-fiction books, even working on her fifth book the day before she died.

She was actively involved alongside Pete at St Michael’s Episcopal Church of Arlington, Virginia, where she served as an acolyte, vestry member, secretary for the church’s Memorial Fund, as well as a member of the Elizabeth Guild, the Women of Wisdom discussion group, and for years on the Planning Committee for the annual parish retreat. Maria also attended services and activities at The Falls Church Anglican with her daughter Clydette. She was a regular supporter of Arlington Concert Orchestra.

True to her nature, the joy of the Lord was her strength. She would often remark, “This is the day that the Lord has made”, and she rejoiced in it – always, even in the face of chronic renal dialysis. Her last conversation with her daughter centered around the importance of putting the joy of the Lord into every day, no matter the circumstances. People described her as a consistently kind neighbor, as well as a “force of nature” with a great sense of humor and spontaneity. She now rejoices in Heaven. She is safely home with Christ and  someday we will join her.

In her memory, donations may be given to St Michael’s Episcopal Church of Arlington, The Falls Church Anglican, or Arlington Central Library. Kindly contact her daughter, Dr Clydette Powell, at oboedoc@gmail.com for further information.

To send flowers to the family or plant a tree in memory of Maria Abbott, please visit Tribute Store
Print
Share A Memory
Send Flowers