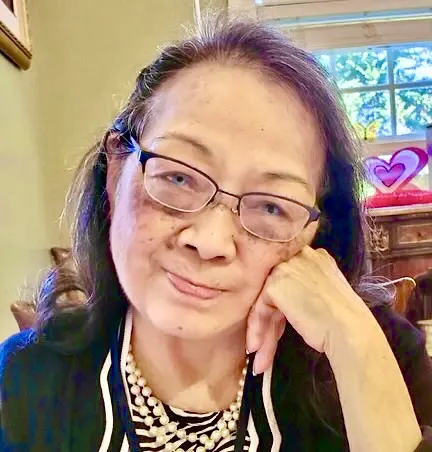 Irene was born on March 20, 1938 to Mr. & Mrs. Jeffrey Xiao in Shanghai, China. She grew up as a physician’s daughter and attended private girls’ boarding schools from elementary school through college.

In her twenties, Irene fled to Hong Kong with her childhood nanny from China during the Cultural Revolution. There, she eventually met and married Henry Khuo, her first and only love. With the generous and loving support of Henry’s sister, Jane and husband, Richard Williams, a now highly-esteemed, retired US diplomat, they immigrated to the DC area in early 1960’s.

Irene has two children – Ray was born in 1969 and Pearl followed in 1971. She worked as a seamstress in a department store and Henry as a salesman at the Washington Monument souvenir shop, when they first arrived. They lived with Dick and Jane for the first few years in DC. Irene reflected fondly on her time with her young nephew, Marc, riding the vacuum cleaner and niece, Maria, swallowing her bubble gum, and many other fun times together. Eventually, Henry and Irene moved into an apartment in Virginia where they lived for the next thirty-five years, raised their children, and filled the space with happy memories despite their modest means and lifestyle.

Fluent in English, Mandarin, Cantonese, and Shanghainese, she became a well-respected government language teacher, like Henry, and also taught at a local university in DC. Their students adored and appreciated both of them for their humor, wisdom, and dedication. She tirelessly continued to work on weekends as a seamstress to make ends meet. She quickly became a “master seamstress” in high demand for special projects and managed other seamstresses. While she worked, Henry took their toddlers to Tysons Corner Mall to run around and eat ice cream until she got off of her shift.

Irene loved being a mother. She spent her limited free time with her kids playing cards and board games, snuggling on the sofa to watch Bob Ross and old movies, and doing crafts on a small coffee table while sitting cross legged on the floor. However, she was also a “tough” woman. While Henry, played tennis and swam with the kids, she cooked, cleaned, and hemmed clothes. She also pulled several “all-nighters” helping Ray and Pearl finish school projects and went to the office the next day without any sleep. She never complained and supported her kids with unconditional love and pride.

She persevered at everything she did, whether it meant spending six hours to repair Ray’s mechanical garage for his Matchbox cars, hunching over yards of material for weeks to sew a cover for our dilapidated sofa, or sitting on a stool all weekend to meticulously cut meats and vegetables for an occasional Chinese feast.

And, through all of the struggles Irene endured and overcame in her life, she maintained her childlike playfulness and lighthearted outlook. During our many doctors’ visits and lunch outings, Mom would gaze out of the car window and say, “Wow! Look at those trees! Fantastic! Fantastic! Ah, such pretty flowers! Bea-u-ti-ful! What a wandaful day! Wandaful! Wandaful!” She loved holding hands and crooning her version of her favorite songs Pearl played on the car radio, laughing at herself for being so off-key. And, of course she loved hugs! Everyone she met fell in love with her, an adorable, cheerful love-sponge.

At almost 83 years old, Irene has reunited with Henry who also passed away at age 83 in 2014. Her health had subtly and suddenly declined on Saturday at 4 am. By Sunday at 4 am, she had passed peacefully and painlessly in her sleep. The caregiver who heard her last breaths said Mom was softly singing “I Belong to You,” a song she rarely sang and humming as she often did while asleep. We imagine that she was singing to Henry as she left this world to join him.

Irene is remembered for her incredibly kind heart, dedication to her family, mischievous humor, and joyful spirit. She is a “Wandaful, wandaful” woman and we miss her tremendously.

Irene is survived by Ray, his wife, Christine, and two granddaughters, Kalia and Clara, who brought her so much joy. She is also survived by her daughter Pearl and husband Chris, whom she adored, as well as two stepdaughters, Jing Jing and Xin Xin, whom she loved as her own. Finally, she is survived by loving friends, family, and affectionate caretakers. She was so fortunate to have caregivers who loved her and enriched her life with laughter and companionship. They enabled Ray, Pearl and family to spend precious, quality time with her. To all of you, thank you!

Funeral services for immediate family and Virtual Visits for extended family, friends, and caregivers will be held on Saturday, January 30, 2021 at Advent Funeral Home from 1 – 5 pm EST. Email invitations will be sent this week for virtual visits.

To send flowers to the family or plant a tree in memory of Irene Khuo, please visit Tribute Store

Share Your Memory of
Irene
Upload Your Memory View All Memories
Be the first to upload a memory!
Share A Memory
Send Flowers