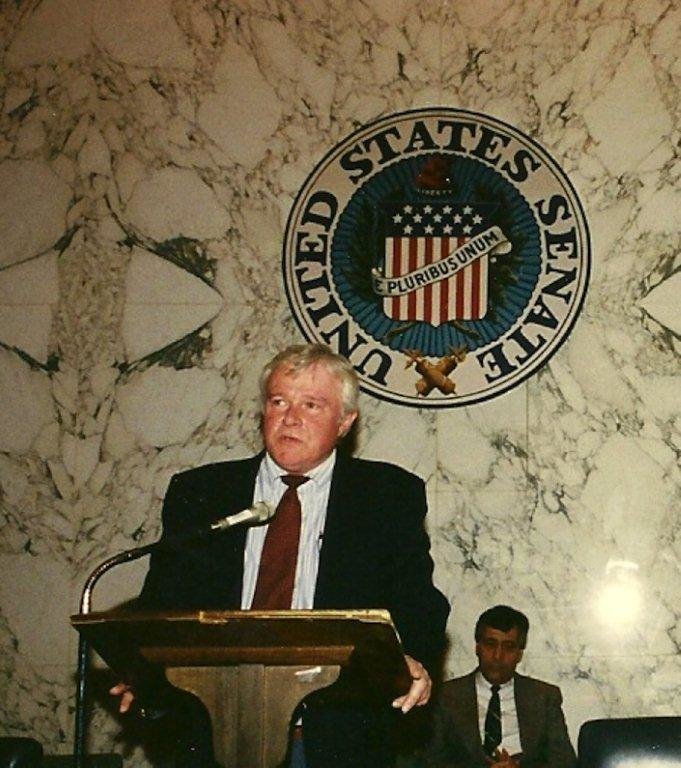 Pete Taylor, aged 83, passed away on December 24, 2020 in Arlington County, VA.  He was born on June 9, 1937 in St. Paul, MN, to Herndon Taylor and Abigail Sargent Taylor and grew up in Topeka, KS.  He graduated with a B.A. in History from Washburn University in Topeka, KS, and subsequently earned a J.D. at George Washington University Law School in Washington DC.  In 1961, he married his college sweetheart, Judy Sick, and she joined him in Washington.  After graduating from GWU, Pete joined the law firm of Friedman & Lipschultz where he was in private practice for several years, before joining the Federal government.

In 1971, Pete began working at the U.S. Department of the Interior and became involved in Native American affairs and discovered his life’s passion.  His work to help Native Americans, to improve their lives in the US, drove his work for the rest of his life.  He initially worked in the Office of the Solicitor, U.S. Dept. of Interior as the Co-Director of the Indian Civil Rights Task Force.  In 1975, Pete was recruited to work on the American Indian Policy Review Commission, a Joint Congressional Commission established to study Federal Indian policy and law.  Within the AIPRC, Pete acted as the Chairman of the Task Force on Indian Law Revision, Consolidation, and Codification.

In 1977, Pete began working on the U.S. Senate Select Committee on Indian Affairs.  For the next 16 years, he worked on the Committee on Indian Affairs in the capacity as Special Counsel, General Counsel, Senior Counsel and as Staff Director during the 99th Congress.  After his retirement from Federal Government service in 1993, Pete became a member of the Ducheneaux, Taylor & Assoc. lobbying firm and continued his life’s work helping Native American tribes to obtain justice in their relationship with the Federal government.

After Pete fully retired from professional life, he enjoyed attending classes through the Arlington County Encore Learning program, writing with his writers’ group and discussing issues of the day with his Current Events Discussion Group.

In lieu of flowers, the family requests donations to the American Indian College Fund, www.standwithnativestudents.org

To send flowers to the family or plant a tree in memory of Peter Taylor, please visit Tribute Store

Share Your Memory of
Peter
Upload Your Memory View All Memories
Be the first to upload a memory!
Share A Memory
Send Flowers