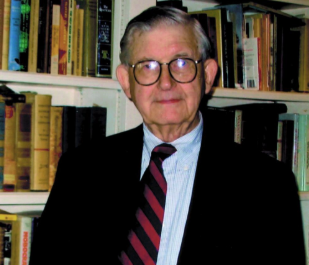 Harold D. Langley, diplomatic and naval historian who served as Associate Curator of naval history at the Smithsonian Institution from 1969 to 1996, died on Wednesday, July 29, 2020 after an extended illness. He was 95. As a naval historian, he was a pioneer in exploring American naval social and medical history.

Born Harold David Langley, the son of Walter Benedict Langley and Anna Mae McCaffrey and the fourth of six children, Harold Langley grew up in Amsterdam, NY. Upon his graduation from high school, he was drafted into the Army of the United States and served from 1943 to 1946, receiving, along with his unit, the Army Meritorious Service Medal and the Asiatic-Pacific Campaign Medal. After his military service, he attended the Catholic University of America, where he earned his B.A. in 1950. He then earned his M.A. in 1951, and his Ph.D. in 1960, from the University of Pennsylvania, the latter with a dissertation on "The Humanitarians and the United States Navy, 1798-1862." This became his first published book, Social Reform in the United States Navy, 1798-1862.

He began his professional career at the Library of Congress, Manuscripts Division, in Washington, D.C., where he served as a manuscripts assistant in 1951-52, while a graduate student. Moving to the University of Pennsylvania Libraries in Philadelphia, where he was a graduate student, he served as a manuscripts specialist in the rare book collection from 1952-54. Returning to the Library of Congress in Washington, he was a manuscripts specialist there from 1954-55. In 1955, Marywood College in Scranton, Pennsylvania, appointed him Assistant Professor of history. He remained there until 1957, when he received an appointment as a Diplomatic Historian in the U.S. Department of State. In 1964, the Catholic University of America appointed him Associate Professor, and in 1968 promoted him to Professor, which he held until 1971. In 1969, the Smithsonian Institution appointed him Associate Curator of Naval History at the National Museum of American History. While holding that position, he was also an Adjunct Professor at the Catholic University of America beginning in 1971.

In 1965, he married Patricia Ann Piccola. The couple settled in Arlington, VA and had two children.

In addition to Social Reform in the United States Navy, Langley also wrote A History of Medicine In the Early US Navy, 1798-1843; and St. Stephen Martyr Roman Catholic Church and Community, 1867-1967. He edited or co-edited Documents on Germany, 1944-59; Documents on Disarmament,1960; Documents on the Exploration and Use of Outer Space, 1954-1962; To Utah With the Dragoons and glimpses of life in Arizona and California, 1869-1969; Roosevelt and Churchill: Their Secret Wartime Correspondence; and So Proudly We Hail: A History of the United States Flag.

In 1996, he retired from the Smithsonian, and continued teaching at the Catholic University of America until 2001. After he retired from teaching, he remained active in the history field, writing articles for historical journals, reviewing books, and working on a follow-up book to A History of Medicine in the Early US Navy. He also traveled regularly to history conferences in the United States, contributing presentations and helping with others.

He received many awards, including the John Lyman Book Awards in the category of Science and Technology for History of Medicine in the Early U.S. Navy in 1995; the K. Jack Bauer Award, from the North American Society for Oceanic History in 2000; the Samuel Eliot Morison Award from the USS Constitution Museum in 2001; and the Commodore Dudley W. Knox Naval History Lifetime Achievement Award from the Naval Historical Foundation. In 2016, The Society for the History of Navy Medicine created an award and named it for him, The Harold D. Langley Book Prize for Excellence in the History of Maritime Medicine. Langley himself presented this award to its first recipient, author and historian Katherine Foxhall.

In 2017, he was diagnosed with dementia and curtailed his travels to conferences. Despite the many challenges this condition presented, he continued to write articles and book reviews for historical publications. As his condition progressed, he moved to an assisted living facility in Alexandria, VA in late 2019, where he lived for the remainder of his life.

He is survived by his sister, Dorothy Sweeney, of Albany, NY; his brother, Roger Langley, of Rockville, MD; his son, David Langley, of Alexandria, VA; his daughter, Erika Langley, of Bremerton, WA; and many nieces, nephews and cousins, along with their families. His wife, Patricia, predeceased him in 2013.

To send flowers to the family or plant a tree in memory of Harold Langley, please visit Tribute Store
Thursday
6
August

Share Your Memory of
Harold
Upload Your Memory View All Memories
Be the first to upload a memory!
Share A Memory
Send Flowers