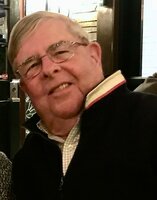 Alan was a respected Investment Officer with United Services Life Insurance Company for over 20 years, earning an undergraduate degree at Penn State and after, serving in the Navy on board the USS POCONO, receiving his MBA at UConn.  He earned his Chartered Financial Analyst designation in the '70s and remained active with the organization, grading CFA exams for many years. Alan retired from the Navy Reserves as Lt. Commander.

Alan's main interests were those involving family. First, with Amy and Andy, and then with Allison and James- he supported each of them with attendance and cheers at sports, drama, music, work, and school activities.  He loved being James and Allison's Gdad.  His pride and love for each of his family was obvious.  When Amy and Andy brought Hugo and Jenn into our family, he could not have been more pleased.  Family Christmas parties were a highlight of the year.

Alan listened and gave sound advice when asked. He was also a great storyteller, keeping us all enthralled with his long, funny stories with, perhaps, some slight exaggerations.  He had a great sense of humor.

Alan was happiest on or near water and he took great pictures of the sunrises from the balcony of their condo in Ocean City, MD. His passion was fishing and some of his happiest times were on the Rogue River in Oregon fishing for steelhead, fishing in the Chesapeake Bay, and deep-sea fishing in the Atlantic off of Ocean City.

Alan and his wife Joyce, of nearly 55 years, met when he was stationed at Norfolk, VA and she was teaching there.  He drove a great ‘57 Thunderbird and Joyce happily took care of it while he was at sea.  They were married in September 1967, after Joyce promised to always have only Heinz ketchup, Miracle Whip "mayo," and no hair curlers!  They truly believed that happiness is being married to your best friend.  Traveling abroad, and taking trips to Maine on the train, trying new cuisines, and being involved in St. Alban’s Episcopal Church in Annandale have all been lifelong pleasures.

Alan did everything at St. Alban’s from softball- to grass mowing- to serving as Senior Warden- as well as heading the Finance Committee at St. Alban's for more than 30 years.

As one friend said, the world will not be the same without Alan in it.

In lieu of flowers

The family kindly asks that in lieu of flowers donations please be made to one of the places that was so dear to Alan:

St. Alban's at the above address