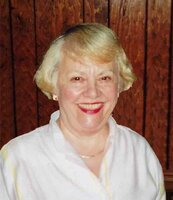 Passed away peacefully on June 2, 2022. A 4th generation Washingtonian, Mary was born on July 12, 1925, to the late Samuel and Alma (Hager) Higgs. She grew up in the Barney Circle neighborhood and was a graduate of St. Patrick's Academy (High School). She attended George Washington University and later Benjamin Franklin University. While attending college she worked at the Washington D.C. law firm of McKenney, Flannery and Craighill. Mary met John W. M. Montgomery, a Naval officer from Malden, MO, who was attending law school at George Washington University. She stole his heart and they married 7 months later in September 1947. They were married 54 years before John passed away in 2001.

A Navy wife for over 20 years, Mary was forever the gracious hostess.  She loved to cook and entertain family and friends and ended up with an extensive collection of cookbooks from her travels, which she read like novels in her spare time. She would often say that if she found one good recipe in a cookbook, the price was worth it. While living in Norfolk, VA she also developed a love for gardening and floral arranging. She said anything would grow in the rich, sandy soil there.

Loving wife and devoted mother, Mary focused her greatest attention on raising her three children and instilling in them the value of education and the belief that anything is possible. She was a frequent volunteer in community organizations, especially those in which her children were involved, such as the Boy Scouts and Gonzaga High School where she was President of the Mother's Club 1966-1967. After raising her children Mary set out on her second career and returned to the law firm, then known as Craighill, Mayfield & McCally, in 1970, where she excelled as a paralegal specializing in estate administration and serving as office manager for the next 30 years.

Mary was a strong, talented, and determined woman who put her heart into everything she did. She loved life and was always a joy to be around. After Mary retired, she was happiest spending time with her family, especially her grandchildren and great-grandchildren. Forever young at heart, Mary spent her days laughing, singing, and recounting her childhood in DC. It didn’t take much to get her to start  telling stories about her neighbors on Kentucky Ave., her favorite teachers at Holy Comforter Elementary School on East Capitol St., and the many evenings during the War II years attending dances to support the troops departing for Europe or returning home. She never lost her love of dancing. Mary touched the lives of so many people and will always be remembered for her caring heart, joyful nature, contagious smile, and her deep love for friends and family.

In addition to her husband John, Mary is predeceased by her beloved son, William R. Montgomery. Family surviving to cherish her memory include her son John (Kathy) and daughter Barbara (Peter) Weimerskirch along with her four grandchildren Jennifer (Daniel) Martin, J. Michael Montgomery, Brian Weimerskirch (Whitney), and Robert Weimerskirch (Jessica) and seven great-grandchildren.

A Mass in Celebration of Mary’s Life will be held at St. Agnes Catholic Church in Arlington, VA on August 24, 2022, at 11:30 with burial to follow at Arlington National Cemetery. In lieu of flowers, donations can be made in her name to Gonzaga College High School, 19 Eye St., NW, Washington, DC 20001 and the Sisters of St. Joseph, Mount Saint Joseph Convent, 9701 Germantown Ave., Philadelphia, PA 19118-2694.