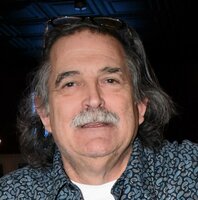 The family of Brett Mullins announces his peaceful death on Friday, April 1, 2022.  He was born on June 6, 1958 and lived his whole life in Arlington and Falls Church.

You can’t think about Brett without thinking about electronics. He had a gift for repairing almost anything. Brett has been repairing and restoring since the tender age of 9 when to his mother’s chagrin, he trash-picked his first television set. It wasn’t long before that poor television was disassembled into countless pieces over the rec room carpet. But to his parent’s amazement, it was just a few days before Brett had fully reassembled all those pieces back into place and had himself a working TV.

At age 12, Brett got his first job as an after-school helper at the local TV repair shop. At 17, he was co-teaching the high school electronics class. When he turned 19, he became service manager for a successful chain of stereo shops in the DC area, and by 25, he had opened a large repair shop which he owned and operated for over 25 years.

Several years ago, Brett began a quieter business where he could do what he loved the most: just repair high quality equipment. That left more time for his membership in the Elks Club. There, he enjoyed the fellowship of the members and was voted Elk of the Month for March 2022!

After electronics, Brett’s second love (besides Laurie), was music. He was part of a lot of different bands and loved singing karaoke. An audiophile, he was one of those exceptional breeds of people who are fascinated by pure audio, motivated by sound quality and addicted to audio gadgets.

Brett leaves behind his wife and best friend of 42 years, Laurie Mullins, his son Nicholas Mullins, his daughter Maggie Thomas, son-in-law James Thomas, and his mother Barbara Mullins. He was predeceased by his beloved father, Forrest (Tom) Mullins. He also leaves behind many relatives and a community of friends  who will miss him.

Flowers or a contribution for Tunnel To Towers Foundation (T2T.org) are welcome.