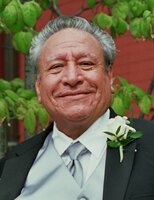 Rodolfo Terrazas Sr. leaves a strong legacy as a devoted father, grandfather, brother, son, husband, and friend.  He is unsurpassed in his love and support for those he valued.  As first child of Nicolas Emilio Terrazas de Velasco and Teresa Rodrigo de Terrazas, Rodolfo was born in La Paz, Bolivia on July 28, 1943.  After the untimely passing of his father when he was 12, Rodolfo spent his years as an adoring and protective elder brother to his three younger sisters and son to his mother.  Rodolfo grew up in a traditional neighborhood of La Paz near Plaza Riosinho.  He graduated from the prestigious high school – American Institute of La Paz, Bolivia.  In high school, he met the love of his life (whom he adoringly nicknamed “Vidis”), Martha Navarro.  He was a competitive athlete, with a passion for playing fûtbol and racing in track and field.  He went on to play semi-professional fûtbol before attending the School of Medicine at the Major University of San Andres.  He attended medical school at the University for two years prior to immigrating to the United States.

Rodolfo and Martha married on February 19, 1966.  They immigrated to the United States, D.C. metropolitan area, in 1968.  Rodolfo spent the majority of his career working at Washington Hospital Center as a medical laboratory technician.  Later in his career, he worked many years as a Spanish-language court interpreter.  His passion for providing court interpreting services was directly attributed to his desire to help those in need have their voices heard and to ensure they were properly informed.

Rodolfo was a devoted family man.  Rodolfo and Martha worked hard to provide a loving and stable home for their three sons in Falls Church/Fairfax County, VA.  He worked tirelessly, including taking on additional jobs while working at the hospital, to provide the best quality of life for his family, affording them every opportunity for a brighter future.

Rodolfo was a strong man that faced many challenges in his lifetime.  However, he remained steadfast and resilient throughout all adversity.  He passed this resilience on to his children and grandchildren by eloquently sharing his profound wisdom from his life experiences with them.

Rodolfo spent his life as a man of faith and was a devout member of the Catholic Church.  He was also an avid American football, soccer, boxing, and mixed martial arts fan.

In 2006, Rodolfo and Martha retired to a home in Groveland, Florida.  After Martha passed away in 2017, Rodolfo spent his remaining years with his youngest son, Nicolas Terrazas, in Fort Worth, Texas.  Rodolfo departed this world to enter eternal rest on Wednesday, January 26, 2022.  He will be remembered in the hearts of family and friends as a nurturing man of strong convictions and a completely caring soul.

We are sincerely blessed and will forever cherish the gifts of unconditional love and devotion Rodolfo benevolently gave us throughout his years.

Priest: The grace and peace of God our Father and the Lord Jesus Christ be with you.
All:  And with your spirit.

Liturgy of the Word

All: Lord, hear our prayer.

Liturgy of the Eucharist

Priest: May almighty God bless you,
the Father, and the Son, and the Holy Spirit.
All:  Amen.