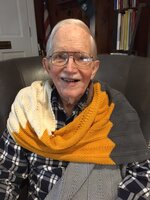 Born in Washington, D.C., Mike was raised on Long Island, but moved to Virginia in 1969 and lived in Falls Church City since 1977.

Mike placed a high value on civic engagement in Falls Church. He was a longtime member and past president of the Citizens for a Better City (CBC). He served a 4-year term, including as chair, on the Falls Church City School Board and served on the Falls Church Private-Public Partnership as the City moved toward more progressive development.

Mike held a PhD in Economics from the University of Chicago. He worked at the Federal Reserve Board and served as Director of the Economic Research Department at the American Bankers Association.

He also worked as an economic consultant with The Aries Group on contracts with USAID. Upon his retirement he was for several years an Economics professor at Northern Virginia Community College, where he was honored as a distinguished professor in 2014.

Mike was a devoted member of Rock Spring Congregational Church for over 45 years, where he served on the Board of Deacons, as a Sunday School teacher, and volunteer communion coordinator, among other roles.

Mike placed great value on his faith and his family, which he often said was his greatest accomplishment.

He is survived by his wife of 42 years Beverly (Cappelletti); his sons Peter (Jenny) of Falls Church, Va., and Brian (Christina) of Arlington, Va.; his three grandsons, Michael, Oskar, and Alexander; and his sister Margaret (of Scottsdale, Az.)

The family would like to thank Advent Funeral Home, Capital Caring Hospice, and Mike’s caregivers: Olivier, Nemandjan and Fatima from Home Instead Senior Care and Toni, Carmen, Prince and Javier from Care Advantage/Capital City Nurses for their loving and tender care.

A service of Thanksgiving and Celebration of Life will be held at Rock Spring Congregational United Church of Christ, 5010 Little Falls Road, Arlington, VA 22207, on Saturday, Sept. 25, at 10:00 a.m. Call the church 703-538-4886 to register. The service will also be live streamed (www.rockspringucc.org/worship-livestream). If you are not able to watch the service live, you will be able to access it through the church service archive, https://www.rockspringucc.org/sermons.