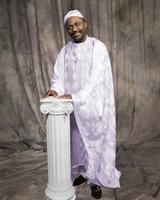 Alfred Obioma Nwoke was born on February 4th, 1955. He was born into the NWOKE EMEZUE Royal house of the Late Eze Shadrack Irokwe Nwoke and Late Mrs. Elizabeth Ifeyinwa Nwoke of Umuabali Umuahia, Abia State Nigeria. He completed his Elementary School at Township School Aba, then attended Secondary School at Methodist College Uzoakoli and Williams College at Afugiri Umuahia. He left for the United States to advance his education and received his Bachelor’s degree in Business Administration at University of District of Columbia, Washington D.C. He also received his Master’s degree in Business Administration at Strayer University, Washington D.C., USA. Obi went into business at his early age by opening a mini restaurant known as “OGADIMA Eatery” during the Nigeria-Biafra Civil War. He was a contractor to different business ventures and established his business line as” OBI INTERNATIONAL. He was also contracted by Ghana Pharmaceutical company as their whole supplier of Medical Intravenous Drugs & Equipment to Nigeria.  In the early 1990’s, he opened a restaurant known as “BAMBOO Restaurant” Washington, D.C. and worked briefly as a Student Retention Manager for 5 years at Strayer University and before finally becoming self-employed as an owner of Taxi Transportation Service. Obi was a strong believer in family. His name known as “OBIOMA” overwhelmingly shadow his life character. Obi was a person with a heart of gold and a beautiful smile to match. He loved people and bore other people’s problems like they were his. He always made you feel important and wanted to help no matter what. I will not fail to mention that Obi is a historian who can capture the attention of both family members and people around him. He will always be remembered for his kindness, generosity, compassion, love for family and friends and selflessness.