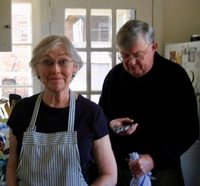 Robert Alphonsus Carpenter, born in Windsor, Ontario, Canada on July 23rd, 1941, passed away unexpectedly in Arlington, VA on February 2nd, 2021. Bob grew up in a raucous, loving household in New Jersey. After studying philosophy and literature at Notre Dame, he joined the U.S. Navy following OSC. Intending to just fulfill his initial commitment, he instead served more than 30 years because of the intelligence and integrity of those he served with and his appreciation of the work’s importance. Bob served most of his career in the Navy’s Security Group, becoming fluent in Russian initially for submarine work, and collaborating with sailors, SEALs, engineers, scientists, and government leadership over the course of his career. He talked about work rarely and mostly elliptically but he always enthusiastically voiced his affection for his colleagues and his love for the work. The Navy took Bob and his late wife Carol to rural Japan, the highlands of Scotland, California, the Spanish coast, Norfolk, and London.

Bob found poetry sustaining, Calvados and Armagnac illuminating, Notre Dame football rarely good enough, and family a pleasure. One of the greatest sources of joy for him was reuniting his father, Jack Carpenter, with his English family. Jack had been separated from family in London, and shipped from an orphanage to Canada at the onset of WWI. Bob was a world-class giver of advice when solicited but used surprisingly few words when giving it. Faith was very important but also absent for decades in the middle of his life. He laughed easily and as much with his eyes as his mouth. He had an easy generosity that drew all sorts of people to him though it’s not clear he was aware of how remarkable it was.

He will be celebrated in a private Mass and laid to rest next to his wife at Arlington National Cemetery on April 19th. He is survived by his two children—Anne and Tito—and four siblings—Jack, Gail, Kathy, and Terese—as well as a legion of mourning friends and extended family. Contact Anne or Tito for details of how we’ll celebrate his life.